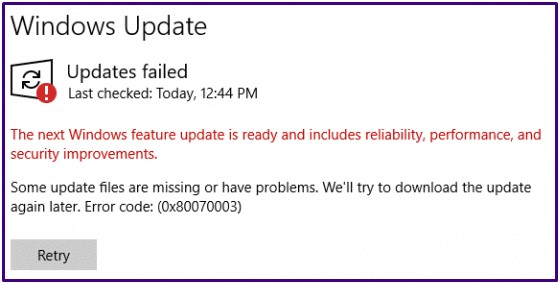 Hello Friends!! If you receive error 0x80070003 while click on widows update in windows 10, then follow our 5 steps to get rid of this error permanently.Generally this error shows that some update files are missing or there is some network problem downloading the update.

If that downloaded file is corrupt then we cannot access them. This image shows you the actual error page that you faced at the time of windows update.

If you windows update issue still persist then follow our second working step which was reset windows update folder. Sometimes due to network or server issue some updates does not download properly and it was damaged.

So we can recover this issue after resetting windows update related folders. Now we are gives you full methods for resetting this folder which was follows:-

Now restart your PC/Laptop, when system get restart then check for windows update. If your issue still same then try our next step of solution.

Some apps, programs and antivirus installed on your PC/Laptop may create issue with the Windows update process. Some Third-party programs, antimalware, antispamware and firewall software often block the Windows Update service.

The fastest way to resolve this issue is to disable all the unnecessary third-party programs, firewall and antivirus which running on your computer. For disable any type of antivirus process will be same which are as follows:-

After follow this antivirus disable process then check issue if error 0x80070003 persists check our next solution.

By restarting those following three services we can get success about windows update error 0x80070003. Process regarding restart services are follows but first we have to stop all three services:-

For example, we are providing you one image regarding stopping service command which was same for all three services.

Now we are providing you one image regarding start service command which was same for all three services.

One Important thing is that we have to check their startup type which was set to Automatic and their state is set for running mode.

After this working process your issue has been resolved. If issue still remain same then try our Last step for rid this error 0x80070003

This spupdsvc.exe file is a genuine file which was a software component of Microsoft. This service in one of the very useful service for all Windows users and runs silently at background. It gives necessary updates to Windows operating system.

When a new update available then a process run in background and finally one entry added to the registry for spupdsvc.exe. The .exe extension indicates an executable file. This type of file run at background of windows process. Basically spupdsvc.exe is a process file which update the operating system (OS) as needed by system.

By following those command we can replace spupdsvc.exe file from system32 folder.

By following this command press enter and you found that new sprpdsvc.exe file has been created on same location which was we required. Now restart your PC/Laptop and then check windows update error 0x80070003.

Hope you get rid of this error 0x80070003 by following our 5 steps/solutions. Please leave a comment on the visible comment box. please Connect With us Einfonet.in