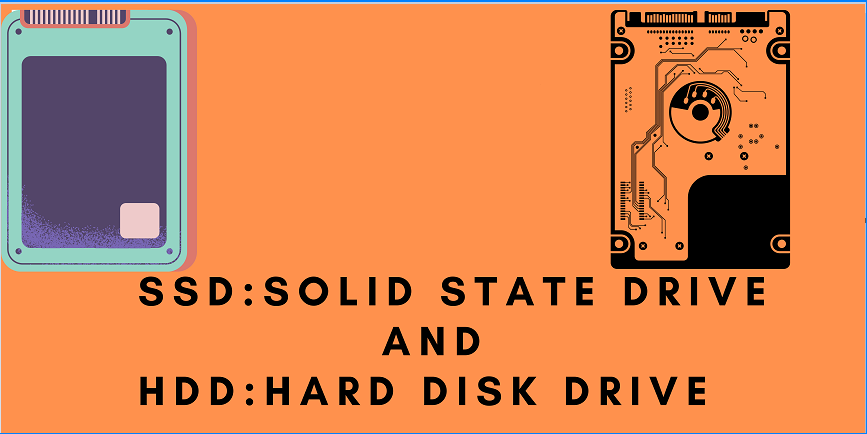 SSD and HDD are both storage devices and do the same thing. In terms of looks, both are almost identical in their physical specifications. However, both are working on their unique features. In this article we are going to tell about SSD and HDD and its difference. Here you will learn about all the device features and other useful information that helps you the most.

The common size of HDD is 2.5 inches for laptops and 3.5 inches for desktop computers. For connection between motherboard to HDD we have to use SATA (Serial advanced technology attachment) and IDE (Integrated drive electronics) interface.

After invention of new technology SSD (Solid state drive) invented. SSD is a very newer, rapid type of device which stores data on instantly-accessible memory chips. This technology is more reliable from previous. If we want to speed up our computer system in booting and all GUI operations then we have adopt more unique option like SSD.

Difference Between SSD and HDD

The main Difference Between SSD and HDD is how the data is stored and accessed. A hard disk drive is a traditional storage device that uses platters and moving read/write heads to access data. Solid State Drives (SSD) are a newer, faster drive than HDD that store data on instantly accessible memory chips.

Both storage devices have advantages and disadvantages. The options depend on the needs of the user and most importantly their budget. We have selected some key points that help us define the Difference Between SSD and HDD .

We are describing the difference between SSD and HDD with some key points:-

This is one of the major difference between SSD and HDD. According to Size SSD cost more our traditional HDD. But SATA based SSD are cheaper than PCIe and M2 SSDs.

SATA (Serial advanced technology attachment) based SSD are not too much expensive than traditional HDD. But according to new technology PCIe and M2 SSD will remain expensive then hard disk drive.

Speed is one of the considerable factor that can determine SSD from HDD. HDD speed usually calculated in RPM (Round per minute). The higher RPM gives high Hard disk drive performance.

But other side if we talk about SSD there are no platters or other moving parts inside, speed of SSD in measured in MB/s(Mega bite per second).

Generally SSD based SATA can achieve speed up to 550 MB/s which is more than three times greater than a traditionally HDD(Hard disk drive).

Apart from this the average speed of M2/PCIe based SSD can go up to 2.2 GB/s. Having all of this it has been proved that SSD is too much faster than traditional HDD.

When we talk about reliability then we found SSD are more trustable. Reason behind that there are no moving part, if your laptop or your SSD accidentally dropped from your hand then hope that your data is more likely to be protected.

On the other hand, HDD is more sensitive to physical damage because they are made from mechanical parts. If accidentally you dropped your HDD from your hand then you have to lose your data with a corrupted Hard disk drive or physical damage. Chance of data corruption is too much high in HDD.

In terms of capacity/volume HDD has advantage over SSD because you have more space at a cheaper price. However Plenty of space is more useful for store more data.

On the other hand, SSD is too much expensive if we compare it to 1TB (Tera byte) HDD. However, SSD size are similar to HDD, but currently SSD are unusual due to its high price.

In terms of each cell in flash memory supports the limited number of read/write cycle, the lifespan (Lifecycle) of HDD is said to be little more than SSD (Solid state drive). Whether there is not a serious concern due to TRIM Command technology already introduces.

TRIM command introduces soon after SSD Came in market. A TRIM command allows an OS (operating system) to inform a SDD which data are no longer for use and it can be erased internally. This Technology (TRIM) optimizes read/write cycles.

HDD have moving parts inside which are movable. We know very well movable things always creates noise. When Platters, which was moving inside the HDD moving faster creates Noise (Sound).

Besides, SSD not making any type of Noise. Reason behind that is SSD have not any movable mechanical part inside, because SSD are non-mechanical device.

About Power Consumption SSD doesn’t have to expend electricity spinning up a platter. Accordingly, no energy consumed by SSD because is wasted as noise, rendering them more efficient. On a PC or in a server that will lead to a lower energy bill and also in a laptop or tablet you’ll be able to increase more minutes of battery life.

Apart from this HDD have platters, and other mechanical devices which consume power for moving it. So HDD consume more energy (Power) then SSD.

Friends!! If you are still confused and not able to get difference about the same, Let we bring for you final words about differences between SSD and HDD.

HDD is a great choice for you if:

SDD is a great choice for you if:

At last according to my personal advice if you want use new invention of Technology like SSD with your existing HDD and don’t want to remove hard disk drive from system, so Purchase New SSD and Put it in as a primary storage device in Computer system and keep HDD as secondary device. After following this your system boot up faster and also all installed program open instantly and automatically your computer system run faster from previous time. For More These Type Of Articles Please Connect with Us .